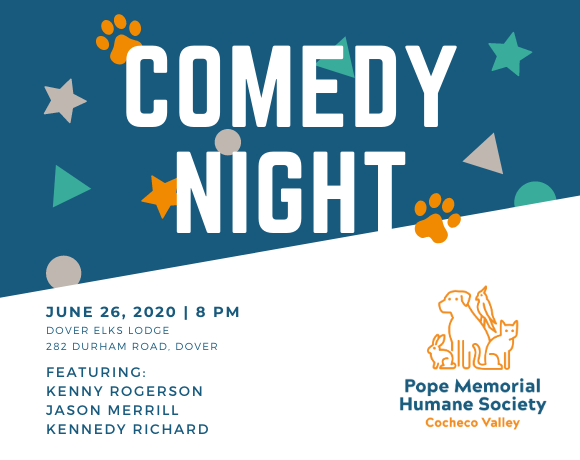 Our Comedy Night Fundraiser has been rescheduled – NEW DATE TBD

Join us at the Dover Elks on June 26th for a night that will have you rolling out of your seat! Comedians Kenny Rogerson, Jason Merrill, and Kennedy Richard will be entertaining you while you enjoy delicious desserts to snack on and a cash bar. You could also walk away with some cold, hard cash if you’re the winner of the night’s 50/50 raffle! All proceeds benefit the animals of Pope Memorial Humane Society. This event is 21+.

General admission is $25. VIP tickets are $35 and get you closer to the stage. If you want to be front and center, you can reserve one of the four tables (8 seats) in our dog pound area directly in front of the stage for $400. You can also reserve a VIP table (8 seats) for $280. Tickets are on sale now. All ticket sales are final and non-refundable.

Here’s a little more about our comedy lineup for the night:

KENNY ROGERSON
For the past 20 years Kenny Rogerson has been one of the top comedians in the region and among the best comics nation wide. As well as making regular stops to perform in Las Vegas and Atlantic City, Rogerson has made appearances on the late night talk shows including Letterman and Conan O’Brien as well as having been seen on Comedy Central, Showtime’s “A Pair of Jokers,” Evening at the Improv, Fox Television Network’s “Sunday Comics,” MTV and has made film appearances in “Fever Pitch” and “There’s Something About Mary.” He has also performed at the prestigious Comics Come Home.

Rogerson has appeared as “Kevin the Biker Fireman” on the FX hit show “Rescue Me” and as “Pat the Cop” on ABC’s “It’s All Relative.” Frequently referred to as “the funniest man you’ve never heard of,” Rogerson combines a brilliant wit and an understated sarcasm that has led him to the nation’s top clubs. He is simply one of the funniest comedians in the business.

JASON MERRILL
Jason Merrill works the top clubs in New England and is a featured performed at comedy rooms such as Giggles, Kowloon, Tupelo Music Hall, and more, as well as sharing the stage with the likes of comedy stars Lenny Clarke, Steve Sweeney, Paul D’Angelo and more. Merrill quickly rose through the comedy ranks and is well on his way to being a star on the Boston comedy scene.

KENNEDY RICHARD
A former police detective Kennedy Richard is a popular New England act appearing alongside the biggest names in the business including Lenny Clarke and Steve Sweeney and he appears at the top Boston area clubs. Richard takes everyday situations and finds the ‘every man’ humor in them.