On July 6th, 2017 a malnourished, bald, itchy pup by the name of Kaine walked through our shelter doors for the first time. Even though his skin was raw, red, and uncomfortable, Kaine was an exuberant and happy boy.

Kaine was originally brought to us because his owner fell on hard times and realized he could no longer provide Kaine with the proper care he needed. We nursed Kaine back to health, but the longer he remained with us, the clearer it became that he suffered from some anxieties. Because of his energy level and anxiety, Kaine found himself constantly overlooked. He sat in the very first kennel to the left on our adoption floor waiting to find his forever family. Eventually, Kaine did find a new home, but unfortunately, adopters don’t always make the animal’s individual needs and well-being a priority. In this home, Kaine’s life became a life of solitude. In this home, Kaine wasn’t always treated fairly. In this home, Kaine’s mental health deteriorated and he was no longer the happy and outgoing dog that came into the shelter the summer before. Now, Kaine’s anxiety and stress were heightened, he didn’t know how to cope with his feelings and underlying behavioral concerns began to arise. 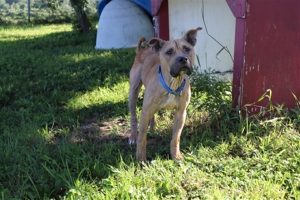 On January 14th, 2018 Kaine returned back to us. Although we were happy to have him with us where he would be safe and sound, we were devastated to see him back in a kennel. It quickly became very clear that Kaine’s already heightened anxieties were being amplified in the shelter environment. Kaine was in a constant state of stress and was desperately trying to communicate that he couldn’t handle being back at the shelter again. He was declining. CVHS staff realized something had to be done to help the boy that had stolen all of our hearts. It was at this time that we reached out to Really Special Animals to get Kaine into a board and train program. Not only did Kaine need to work on some basic manners, he also needed to learn ways to cope with his anxieties.

In a board and train situation, Kaine could work on his behavioral concerns while remaining in a calm and relaxed environment. He stayed with Really Special Animals for three months, but eventually, his time with them began to run out. Staff at CVHS began to grow worried about Kaine’s future, as we knew he couldn’t return to the shelter environment that had caused him so much stress previously. We searched high and low for a potential foster or adopter for this wonderful boy. His posts have reached tens of thousands of people. His face was recognizable by many in the community. But still, Kaine remained unwanted and without many other options but to return to our facility. We posted about Kaine once again on social media and thanks to all of YOU we were able to extend his stay with Really Special Animals. Now, Kaine will remain in foster with Really Special Animals while also taking part in training to maintain all the progress he has made. Although we raised the money to keep him in a space that is familiar, safe, and soothing now, these funds are quickly being depleted.

We are trying to do right by Kaine, we are doing all we can to keep him out of the shelter environment that caused him so much turmoil, however, training and boarding is expensive. In just over a month, it will have been a year since Kaine first walked through our shelter door. We want nothing more than for him to walk out of it one last time and never have to look back again. Kaine needs to find his forever home, not eventually, not soon, but now. We know with your help we can find Kaine some kindness, and sharing this post or donating towards Kaine’s care will get us one step further towards that goal! If you are interested in giving Kaine a home or foster, contact [email protected] or call the shelter at (603) 749-5322 ext. 102. You can also donate to his cause on our donations page. Just be sure to put “#KindnessforKaine” in the notes section!

Thank you for sharing!